Notice to South Africans: Please visit sacoronavirus.co.za for up to date information on the COVID-19 outbreak.
Blog | Women's Rights | Womens Rights – How far have we really come?

Womens Rights – How far have we really come? 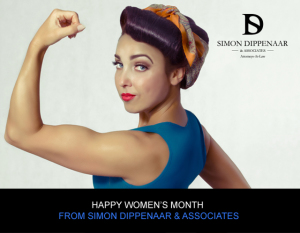 Women’s Day (and Month) celebrates the power that is unleashed when women band together and, in solidarity, demand that those in power sit up and take notice.

We celebrate Women’s Day on the 9th of August in commemoration of the 20,000 women who marched on the Union Buildings in Pretoria in 1956 to protest the unfair and unjust pass laws of apartheid South Africa. Those women were prepared to put themselves on the line and risk arrest to stand up for their country and the type of country they wanted to live in.

We commend them for their part in the long drawn-out struggle that eventually saw South Africa throw off the shackles of apartheid and embrace democracy. But where are women today? Have they won the rights their mothers and grandmothers fought so hard for? Let’s look at the statistics…

Despite our progressive constitution that guarantees all South Africans equal rights regardless of race, gender and sexual preference, women lag behind men in the workplace, both in terms of employment rates and pay. South Africa has an overall gender gap of 25%, as measured by economic participation and opportunity, education, health and political empowerment. According to Stats SA, in 2013 the unemployment rate among women was 27.5% compared with 23.4% among men. The gender pay gap remains static at 35%.

Writing in the Daily Maverick for Women’s Day, Laura Lopez Gonzalez reported on trends in food production and supply and the squeeze women are feeling at both ends. She says, “Women tend to be up to 30% poorer than men, while women-headed households are between 38% and more than 100% poorer than households headed by men (according to the 2008 National Income Dynamics Study).” Women make up a high proportion of retail workers, such as those on the check-out counter at Pick N Pay or Woolworths, and they are often on casual contracts with no guaranteed income, unrepresented by unions, largely underpaid…the so-called ‘invisible workers’. As consumers, women are particularly affected by rising food prices. Gonzalez says, “High prices hit poor women hardest, as mothers across the nation strive to stretch money from grants and what is likely to be informal employment into three meals a day. In a country with persistently high levels of stunting due to malnutrition, they are not winning.”

South Africa is known as the rape capital of the world. Just how bad is it?

According to Rape Crisis Cape Town Trust, police crime statistics from September 2012 cite a total of 9 193 sexual offences reported to the South African Police Services (SAPS) in the Western Cape for 2011/2012. This translates to just under 27 cases per day. In total, 64 514 sexual offences were reported countrywide for that period.

And this may be a huge understatement of the real problem. Many incidents of rape and sexual assault go unreported; it has been estimated that if all rapes were reported, the figures could be as high as 84 000 for the province and over 500 000 for the country.

There are many historical and social explanations for our shocking rape statistics that are beyond the scope of this article, but let’s look at some of the reasons why a woman may choose not to report rape:

These factors are compounded by the stigma associated with rape, and by the many myths and stereotypes that still abound about rape. Victim-shaming, which suggests that the woman’s behaviour encouraged the rapist to rape her, is rife. But the biggest barrier to reporting a rape seen by Rape Crisis Cape Town Trust is the rape victim’s lack of faith in the ability of the South African Criminal Justice System (CJS) to offer her services, to protect her, to treat her with dignity and respect and, above all, to support her claim to justice and to act as a deterrent to rapists.

We will help you fight for your womens rights

Whether you are a victim of sex discrimination or other labour law infringements at work or have experienced sexual assault or rape, including within marriage, Simon Dippenaar & Associates Inc. can help. Simon will listen to you and handle your case with sensitivity, compassion and dignity; but he will fight for your rights with steely determination and persistence. If you have raised a case with the police and feel they are not taking you seriously, speak to Simon today on +27 (0) 86 099 5146 or email simon@sdlaw.co.za

This entry was posted in Women's Rights and tagged in women’s day, womens rights.

« Arrested unlawfully? Don’t wait for the worst to happen
Will you secure your family’s future? »