No one can deny that the last few months have been a tough time to be a South African…violence against women that seems unstoppable, xenophobic attacks, a weak rand, and a government that appears unable to address these and other issues with any authority. Add to that the tragic loss of national icon, Johnny Clegg, and there hasn’t been a lot of good news to shout about. 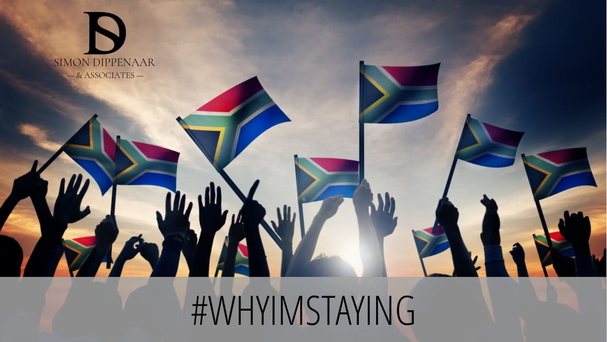 But we South Africans are a resilient bunch. Determined to rise above the negativity, a small group of individuals committed to showcasing the good in our country set up the Facebook group #ImStaying. The description on the page says, “This group is dedicated to the South African women and men of all races and all religions, who remain loyal to South Africa. This group is to honour all those who still believe that we as a nation can turn things around. To all those who choose to stay and work together to save this beautiful country we call home!” This group has been gaining momentum and now boasts nearly 500 000 members, with more joining by the day. People share their stories of kindness, compassion and commitment using the hashtag #I’mStaying.

At SD Law, we’re staying. We have dedicated our lives and careers to seeking justice for South Africans. Every day we come face to face with the best and worst of society; and we firmly believe that the good in this beautiful land far outweighs the bad. Here’s why #ImStaying.

South Africa has the most progressive constitution in the world, and one of the youngest. The current constitution, officially the Constitution of the Republic of South Africa, 1996, is actually our fifth, and was drawn up by Parliament in 1994. It was enacted by President Nelson Mandela on 18 December 1996 and came into effect on 4 February 1997, replacing the Interim Constitution of 1993. Since 1996, the Constitution has been amended by seventeen amendment acts.

It is founded on the principle of human rights, enshrined in Chapter 2 – the Bill of Rights. The Bill of Rights is a human rights charter that protects the civil, political and socio-economic rights of all people in South Africa. You may know what they are, but many people do not, so it’s worth reiterating exactly what our human rights are.

It’s not difficult to understand the basis for and importance of these fundamental human rights. Every single one of them was abused under the apartheid regime. But not every country with a turbulent past has been able to take such a decisive stand against human rights abuse. Our Constitution is admired the world over.

There are only 28 countries that allow same-sex marriage, out of a total of 195 countries in the world recognised by the UN. South Africa was the fifth country to legalise same-sex marriage, in 2006. Furthermore, this legislation was a direct result of a constitutional challenge to the earlier marriage laws on the basis of human rights – the right to equality includes the right to marry.

South Africa offers asylum to people from other countries who are persecuted for their sexual orientation. Unfortunately, cultural norms have not kept pace with legislation, and members of the LGBTQI community do experience discrimination and abuse, both verbal and physical. At SD Law we condemn this and continue to fight for equality and freedom of expression, including sexuality and sexual preference. The protection of the law may not put an end to deep-seated prejudice, but it does mean there are penalties for harassment and intimidation that do not exist in many neighbouring countries, where persecution of same-sex relationships is carried out by the state.

Perhaps it is because of our history of oppression and injustice, but civil society in South Africa is one of the most active in the world. We are proud of organisations like the Treatment Action Campaign, Section 27, the Legal Resources Centre, the Black Sash, Sonke Gender Justice, SWEAT, Open Society Foundation for South Africa, Right2Know, and many others – too many to name – that play a vital role in our democracy. These organisations function as overseers of democratic institutions; they monitor human rights and give citizens, especially vulnerable and marginalised populations, the tools to defend their rights. Some of SA’s finest activists have found their voice through – or indeed founded – these important institutions.

Lastly, who can deny that South Africa is one of the most beautiful countries on earth! From the Drakensburg to the Wild Coast to the Garden Route to Kruger National Park to the Karoo to Table Mountain, and everything in between, we think South Africa has it all. #ImStaying

SD Law is a firm of Cape Town and Johannesburg attorneys with a deep commitment to constitutional law. If you have experienced discrimination, either at work or in your community, or you feel your rights have been infringed in any way, contact Simon on 086 099 5146 or email sdippenaar@sdlaw.co.za for a confidential discussion. We will protect your human rights.