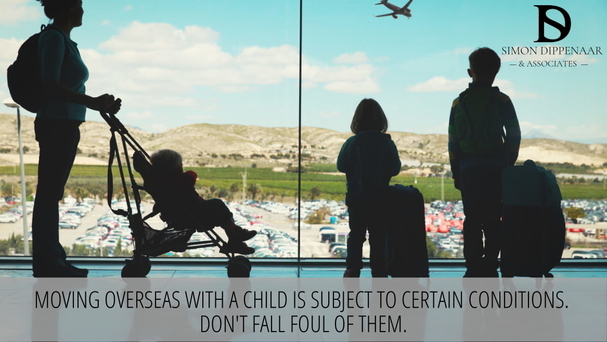 It is becoming increasingly common for couples to marry across borders. International travel is more accessible and over the past decade there has been an influx of immigration into South Africa, resulting in more marriages between partners of different nationalities. Inevitably, some of these marriages will end in divorce. Equally predictably, some parents will want to return to their country of birth with the children of the marriage…in other words they will seek international child custody.

In this post we will look at 1) how you can do that legally and 2) what to do if the other parent has removed your child to another country without your consent.

INTERNATIONAL CHILD CUSTODY: WHAT THE LAW SAYS – THE CHILDREN’S ACT 2005

South African law does not explicitly govern international child custody, and relocation with children post-divorce. All matters concerning children are legislated by the Children’s Act 2005. This progressive piece of legislation takes the focus away from the rights of the parents and places the child at the heart of all decisions. “In all matters concerning the care, protection and well-being of a child the standard that the child’s best interest is of paramount importance must be applied” (Section 9). The Children’s Act does not directly mention the relocation of one parent or the other, nor does it legislate consent procedures. However, Section 18 stipulates that consent of both parents is needed if one or other wants to emigrate with the child(ren).

The wellbeing of the child extends beyond simple contact with each parent. In some cases the move might be in the child’s best interests. For example, if one parent has an employment opportunity overseas that will significantly enhance the quality of life or environment the child experiences, that situation may be considered as good for the child as remaining near the non-custodial parent. South African law has tended to decide international child custody matters on a case-by-case basis. Furthermore, the views of the children will be considered, though not necessarily accommodated.

While relocating with a child is not as difficult as you might think, it is still a situation that needs to be handled carefully and with due consideration for the law. Failure to follow the correct procedures could have unwelcome consequences down the line. Furthermore, once a child is settled in an environment, even a foreign one, courts are usually reluctant to disrupt the child’s wellbeing by reversing an earlier decision. So if you are considering moving abroad with your child, or if your child’s other parent is relocating with your consent, it is a good idea to take legal advice regarding international child custody. Cape Town family law firm SD Law will ensure your conduct complies with the Children’s Act, in letter and in spirit. We will look after the interests of the child while at the same time respecting your wishes and those of the other parent.

International child abduction is a much more serious matter and is increasingly common globally, as air travel becomes more affordable. The abducting parent may not think of themselves as such or even realise that their behaviour is classed as abduction.

The Hague Convention defines the removal of a child as improper if it breaches the custody right of anyone based on the laws of the nation where the child was resident prior to their removal. Where two parents have shared (equal) care of a child (i.e. custody), both parents must give consent for a child to be removed, as also required by Section 18 of the Children’s Act. When there is a dispute about a child’s care between countries that are both signatories of the Hague Convention, the courts of the destination country are responsible for returning the child, if appropriate, i.e. unless there is a risk of a human rights violation such as female genital mutilation, and as quickly as possible. Under the Hague Convention, the return should be effected within six weeks.

DEALING WITH A FOREIGN COURT

With luck, and in most cases, the Central Authority and/or your divorce attorney will be able to locate your child and negotiate their return without involving foreign courts. However, if the matter does go to court, there are factors beyond legislation to bear in mind. Has your child been taken to a jurisdiction where cultural or religious beliefs are different to ours? Some countries have a tendency to grant sole custody to mothers. Others may lean toward awarding care to fathers. If a girl child is promised in marriage at a young age, traditional cultures may defend this practice and resist returning the child to the home country. While you can’t change entrenched beliefs in another jurisdiction, the more you are aware of the issues that may impact your case and the better prepared your legal advisers, the greater your chances of success.

WHAT YOU WILL NEED

In order to begin the proceedings,  for international child custody, that will hopefully result in the return of your child, you need:

WE’LL SUPPORT YOU EVERY STEP OF THE WAY

At Cape Town family lawyers, we know that being separated from your child is traumatic for you and them. We will work tirelessly to effect a speedy reunion with as little distress for all parties as possible.

If you are relocating with the full consent of the other parent, we will help you revise your parenting plan to reflect the changed circumstances and protect the rights and interests of the child and both parents. Excellent legal advice regarding international child custody will ensure the best outcome in either scenario.

Contact Simon on 086 099 5146 or email sdippenaar@sdlaw.co.za to discuss your case in confidence.