Red Ants continue to disregard due process of law

Illegal evictions and fatalities are calling cards of Red Ants

At Cape Town eviction lawyers Simon Dippenaar & Associates (SDLAW), we were angered and saddened to learn of recent illegal actions by the Gauteng security company Red Ants. The Red Ants firm specialises in “urban management support services for human settlements”, and was established to counter the influence of large, multinationals who dominate the South African economy. Its mission is “to protect, train, empower, serve and provide food security to our communities”. A noble mission indeed, yet more often than not the Red Ants are the cause of homelessness in those communities rather than providing security, food or otherwise. 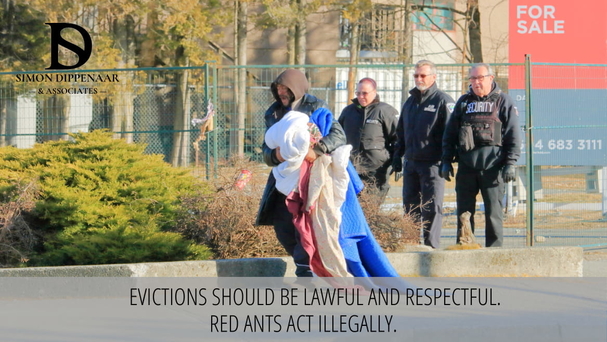 As eviction attorneys we uphold the rights of property owners under the law, but we also fight for tenants whose rights are threatened or disregarded. We defend the Constitution, and base our law practice on the citizens’ rights bestowed therein. Eviction law has been carefully crafted to protect the poor and the vulnerable, after decades of exploitation and unfair practices under apartheid. Everyone has the right to adequate housing. Therefore the recent actions of the Red Ants in Gauteng are disappointing and disturbing.

Earlier this month, more than 80 shacks, allegedly built illegally and too close to the Jukskei River, were destroyed by the Red Ants in Alexandra, Johannesburg, rendering 100s homeless. However, the Red Ants are not solely to blame. Johannesburg Mayor Herman Mashaba has said that the demolition was unlawful and should not have been authorised by city officials. The eviction order was in fact obtained in 2016 (before Mashaba was elected), but the eviction not carried out until now. Mashaba vows to “get to the bottom of it” and rebuild the demolished structures timeously.

Last October, the Red Ants were also involved in a mass eviction in the Joburg CBD. In this case, residents were not forewarned of the eviction and many of their personal possessions were destroyed, in a callous and brutal removal that took place while many occupants were at work. We can only imagine the horror of returning home to find your belongings damaged or destroyed and your home uninhabitable. Occupants of the Marshall St building were mostly domestic workers, taxi drivers and informal traders, vulnerable individuals with limited means either to replace their possessions or to take action against the city. In this case, according to Tshepo Skosana, the sheriff who carried out the eviction order did not act in accordance with due process of law and “was negligent in fulfilling his duty to inform the residents of their pending eviction, which made the process illegal”. The Red Ants were the purveyors of brutality, but not the cause of it.

Death in the Vaal

It’s bad enough losing one’s home, but eviction should not result in loss of life. Sadly, this is precisely what happened in April when an eviction in the Vaal area of Gauteng, again facilitated by the Red Ants, led to clashes with community members. Two died, one from the Red Ants and one from the community, and six were injured. Yet again, the Red Ants and the Sheriff were acting on a court order to remove occupants from illegally erected shacks. The casualties happened when a fight broke out between the residents and the Red Ants.

Duties of the Sheriff

As Eviction Lawyers in South Africa, we do not condone the construction of unlawful dwellings. Residents should act within the law in choosing a site and erecting a structure. However, the current housing situation in South Africa does not always make that possible. Although there is a comprehensive social housing strategy that includes RDP homes, Community Residential Units (CRUs) and Upgrading of Informal Settlements (UISP), waiting lists are long and government has fallen behind in meeting its housing commitments to the poor and vulnerable in our society. It is no wonder communities sometimes take matters into their own hands. Section 26 of the Constitution guarantees the right to adequate housing, so they are only claiming their constitutional rights.

But landowners also have a right to the proper use of their land, so they may seek an eviction order when homes are built illegally. However, the court has an obligation to consider all circumstances before granting the order. According to Skosana, if occupants will be made homeless, there must be provision of alternative accommodation for an eviction to be lawful. The court must also consider the number of women and children and old people affected by the eviction and this will influence the amount of time granted before the order can be served. Turning people out of their homes with no warning breaches these conditions and more.

The Sheriff’s role is serve court documents. This includes orders of eviction. The Sheriff has a duty to inform the occupants of the situation, in terms they will understand, and this includes their right to be represented in court. The Sheriff is also obliged to treat everyone with dignity and respect, and ensure that belongings are properly looked after during an eviction. The use of violence and threats in effecting an eviction is an abuse of the Sheriff’s authority.

In all these cases the Sheriff acted together with the Red Ants to intimidate residents and damage or destroy their possessions. Neither party can claim that they implemented a legal process.

Protection under the law

Residential tenants are protected through the Prevention of Illegal Eviction Act (PIE) and the Consumer Protection Act (CPA). A stringent eviction process is meant to safeguard human dignity, property, and ultimately life! As a specialist eviction attorney we are diligent about observing lawful eviction procedure. We condemn the abuse of power recently demonstrated by the Sheriffs and Red Ants involved in these evictions.

Landlord or tenant – let us help you

Eviction lawyers are now in Johannesburg, Pretoria and Durban, as well as Cape Town. So wherever your property is located, we can help you with an eviction matter, whether you are landlord or tenant. If you have been the victim of an illegal eviction, call us today.

« International child custody
Rental arrears? Is it worth trying to collect? »