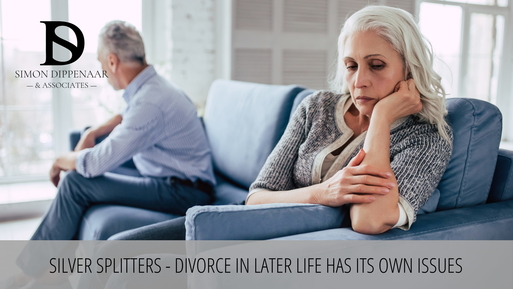 “Silver splitters” – what are the issues for later-life divorce?

The average age for divorce in South Africa is 41 for women and 45 for men. 44% of divorces happen between five and nine years of marriage. But there is a growing trend for couples to divorce later in life, personified in the high-profile divorce of Bill Gates (65) and Melinda French Gates (56). Bill Gates has a net worth of $129.7 billion and Melinda French Gates is worth $2.4 billion, after a stock transfer from Bill on 3 May. While this may be a fraction of her ex-husband’s value, $2.4 billion is enough to keep Melinda from being a poor divorcée. As a couple, the Gateses own properties all over the US, including horse ranches in Florida and 242,000 acres of farmland, making them the largest private farmland owner in the US. Dividing all these assets will be the job of the team of crack lawyers engaged by both spouses to handle the divorce.

Why are we so surprised by the Gates divorce?

They seemed like the perfect couple. They had a shared interest in the Bill & Melinda Gates Foundation (though if you look beneath the surface, their specific areas of focus are quite different. How can such a “golden couple” divorce? There are several factors at play here.

Firstly, it’s called publicity! They have both been in the public eye long enough to understand the importance of good publicity, and the damage done by bad publicity. It is likely the events that led up to the divorce announcement had been going on for some time, but the couple had the good sense and the discretion to maintain their privacy until they were ready to make a statement. This ensured media coverage was on their terms and they were not subject to the speculation so common with celebrity divorces.

Secondly, they are mature, professional adults whose lives are built around caring and compassion. It would be a surprise, not to mention a betrayal of public trust, if they were to start sniping at each other now.

But the reason we are most surprised is that there is an intrinsic assumption that marriages which survive the hard years of building careers and raising children have weathered the storm and are entering the halcyon years. Once the children are grown, life should be easier, and the couple freer to enjoy each other’s company. The rising number of “silver splitters” disproves this. Sometimes, without the glue of family issues binding a couple to each other, they realise they can no longer “grow together as a couple in this next phase of our lives,” to quote the Gateses’ announcement.

The generation of women now approaching retirement is the first to work full-time as a matter of course. That’s not to say that women in previous generations did not work, nor to suggest that all women in their 50s and 60s have pursued lifelong careers. But as a generalisation it is true. For these women, as their teenagers become adults and retirement beckons, a renewed purpose and zeal for life often emerges, in a way that was less common in years gone by. They may look at their husband of 30 years and decide this isn’t the person they want to spend the next 30 with.

As life expectancy increases, the post-working phase of our lives lasts a lot longer than it used to. Some couples who stayed together while raising children are concluding that they may not want to spend every day in each other’s company when there is no job to distract them from an unsatisfactory relationship. Relationship counsellor Dawn Kaffel says, “I think it’s something about getting towards another stage in life and people thinking it’s their last chance to find happiness.” Kaffel believes COVID-19 and the associated lockdowns have added to the appetite for living life to the full and not just muddling through. “People are going to want to get re-energised and move on,” she says.

If we assume the Gateses are typical of silver splitters, later-life divorce is grown-up, amicable, and simple. After all, with children grown, one of the biggest sources of conflict in the divorce settlement is removed. While this may be the image more mature couples wish to project, it’s not entirely true. There may not be custody battles, but don’t underestimate how painful divorce can be for adult children…or for the spouses themselves. However much both might wish to move on to pastures new, their lives are entangled – both financially and emotionally – in a way that younger couples have yet to encounter. When you’ve spent more time in life married than single, the prospect of renewed singledom, while exciting, can be very daunting.

Then there are the assets to divide. Most of us don’t have billions of dollars’ worth of properties and shares to fight over, but considerable resources may have been accumulated over time. House price inflation alone can make the family home, which might have carried a modest price tag years ago, a valuable asset now. Pension splitting becomes much more critical, and more complex, the closer to retirement the couple is. And not only is the process of splitting the pension entitlement messy, there are repercussions. A joint income that will maintain a comfortable standard of living and two holidays a year in one home will seem a lot less generous when supporting two households. Hopefully each spouse has their own pension, but inevitably one partner – usually the husband – earns more than the other, and negotiation is necessary. It’s unlikely the separate lifestyles will be equivalent to the lifestyle that would have been shared had the couple stayed together.

Most couples will consider all these factors before making the decision to divorce. Silver splitting is not an easy option and couples should, as the Gateses appear to have done, weigh up their options carefully. Is the ability to move on worth the reduced standard of living and sacrifices involved? This is something only those involved can answer, but relationship counselling can help.

The importance of the matrimonial regime and ANC

Bill and Melinda Gates did not have an antenuptial contract in place. Unlike South Africa, where couples can choose their matrimonial regime, each state in the USA has its own legislation. The state of Washington is a community property state. All property and all debt accumulated during the course of marriage, including income, is classed as “community property” belonging to both spouses. However, property acquired prior to the marriage, property acquired by gift, and some personal injury settlements are considered the separate property of the spouse who acquired it. Although the name resembles our marriage in community of property, this is probably closer to our “out of community of property with accrual”. Bill Gates is nine years older than Melinda, and was already a rich man by the time they married, so some of his assets may be off-limits in the divorce settlement. But all indications are that this will not be an acrimonious divorce. Although the couple does not have an antenuptial contract, they have a separation agreement, which is a document written by the pair outlining how they wish their assets and responsibilities divided. This suggests there was a lot of work done behind the scenes before the divorce was announced.

It’s too late for Bill and Melinda, but if you married without an antenuptial contract, it’s not too late to change your matrimonial regime. This can be done via a postnuptial contract. If you don’t have an antenuptial contract, your marriage is automatically in community of property. In South African law, this means that all assets, whether brought to the marriage or acquired afterwards, are the joint property of both spouses and are divided equally in the event of divorce. Many young couples opt for marriage in community of property because they don’t have any assets and don’t see the value in an antenuptial contract. However, as the spouses grow older, they may well each develop significant assets in their own right, perhaps through entrepreneurship or inheritance. It’s common for mature couples to revisit their regime with a view to protecting individual gains, should the marriage not last “until death do us part”.

Both parties must agree the change of regime, and an attorney will draw up the postnuptial contract. This must be approved by the High Court. Approval is rarely withheld, but certain conditions have to be satisfied. Full details of the requirements for a postnuptial contract can be found here.

SD Law is a Cape Town law firm of experienced family law attorneys, with offices in Johannesburg and Durban. If you’re considering marriage and would like to discuss matrimonial property regimes, or if you would like to change your matrimonial regime via a postnuptial contract, call family lawyer Simon Dippenaar on 086 099 146 or email sdippenaar@sdlaw.co.za.

This entry was posted in Divorce and tagged in Cape Town Lawyer, divorce attorneys, Family lawyers.

Previous post:
« 27 April – did you know these 10 facts about Freedom Day?
Next post:
Married out of community of property with accrual? »