We’ve written previously about toxic masculinity, #metoo, and gender-based violence and discrimination. This article from the Guardian, by Vanessa Thorpe, 2020-03-14, reviews several new attempts to redefine modern masculinity. The views expressed are not necessarily those of SD Law. 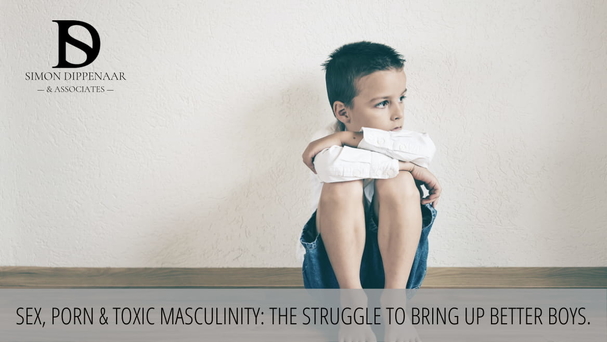 Dominance. Aggression. Rugged good looks. Sexual prowess. Stoicism. Athleticism. These are attributes of “the ideal guy” according to the young American men who spoke to author Peggy Orenstein for her new book, Boys & Sex.

In contrast surveys reveal that teenage girls are now more comfortable about rejecting stereotypical roles, thanks in part to simple slogans such as “Girl Power” and “Yes She Can”, coupled with the liberating message of the popular Frozen animation franchise. Music, sport and young adult literature have all been happily singing from this feminist hymn sheet for some time.

How about the boys then? Now the daunting task of exposing and exploding some of the equally damaging conventional pressures on male children and teenagers has received a boost with the publication of two striking new studies and the arrival in cinemas of Disney-Pixar’s recent release, Onward.

All attempt to show that boys need urgent help to express their feelings and deal with what society expects of them. And all three have met with a negative reception in some quarters.

The two books, Orenstein’s Boys & Sex, available here in paperback on Friday, and Cara Natterson’s Decoding Boys, out last month, argue that unless parents move swiftly to tackle their sons’ adolescent confusion and alienation, their daughters will soon leave them far behind when it comes to coping with emotions. Sex education for boys, they warn, has been left to the pornographers and football coaches, while the effects of changing male hormones are commonly misunderstood.

The aims of these twin examinations of modern boyhood sound pretty laudable, but they have already prompted accusations of bias and a suspicion that they’re designed to berate men, rather than help them.

Writing angrily in the conservative online magazine The Federalist, Glenn T Stanton alleges that Orenstein and Natterson’s books have only been welcomed by the liberal press, as represented by The Atlantic magazine, because they appear to support the idea that “toxic masculinity” is running rampant. By concentrating on examples of poor, insensitive male behaviour, Stanton believes the findings of the authors are just fuelling calls for current ideas of manhood to be ripped up and chucked away. Defining any social group, including young men, by its extremes is wrong, he argues.

Another male critic, who wrote in from Chicago in response to an article by Orenstein in The Atlantic, suggested that symptoms of “toxic masculinity” tend to be shrugged off by men as they grow up. He also felt that Orenstein’s choice to study young white “jocks”, or college sportsmen, had skewed her results: “Had she spoken with members of the debate team, for instance, or the drama club, or the school band, she might have opened a window to a very different landscape.”

It made Orenstein wonder if parents have been looking the other way for too long: “Feminism may have provided girls with a powerful alternative to conventional femininity, and a language with which to express the myriad problems-that-have-no-name, but there have been no credible equivalents for boys. Quite the contrary: the definition of masculinity seems to be in some respects contracting.”

In Natterson’s book, which has the subtitle, New Science Behind the Subtle Art of Raising Sons, a series of useful bits of advice have been crafted from the author’s long practical experience as a paediatrician. The New York Times has judged it a good guide for all parents of boys and praised its “zippy, big-hearted” tone as it explains that puberty starts much earlier in boys than we used to think. It also argues that teenage boys should not be allowed to retreat into monosyllabic and fleeting family interactions. According to Natterson they need more emotional and physical reassurance than we ever realised.

Certainly this is one of the main messages to take away from Pixar’s latest family hit, Onward. It tells of two elf brothers in their teens, voiced by British star Tom Holland and Chris Pratt, who live in a magical version of suburbia and who are struggling with the death of their father.

Director Dan Scanlon’s film topped the American box office chart on its opening weekend, raking in £30.5m, and it has won praise for its honest handling of male emotional blockages. “The fractious bond between the brothers and their aching anger at the loss of a parent are evoked with exquisite sorrow and clarity,” wrote the Observer’s Wendy Ide.

But several Middle Eastern countries have since balked at Onward’s liberal sensibilities, and more specifically at its casual acceptance of homosexuality. It cannot now be shown in Kuwait, Oman, Qatar or Saudi Arabia, according to showbusiness journals. The offending character is Police Officer Specter, voiced by actor Lena Waithe, who has spoken of her delight at playing Pixar’s first openly gay role.

These critical reactions might indicate that modern efforts to re-define gender conventions are doomed, if not to failure then to infinite levels of complexity. And limiting the discussion to biological sex is not much simpler.

A teacher at a boys’ school in Baltimore joined the American debate last month to point out that when teenage boys are assumed to be emotionally insensitive, it can sound to them as if they are being deemed immature, or even stupid.

In fact, he argued, most boys are quite capable of complex thought at all ages, just like girls: “Boys understand themselves – good, bad and ugly – a little more than we give them credit for, and that knowledge concerns them. It should not only concern us – the adults around them – it should impel an immediate change in our actions and attitudes.”

Orenstein pushed back at criticisms of her approach with a clear defence. Many boys may well mature out of bad behaviours, but some do not, she suggests, and, whatever happens to them in the future, what of those they harm? Among her chief findings were that boys fret about how sensitive to seem on a first date. They also complain that asking permission to initiate physical intimacy is perceived as being soppy, or as they might say, “lame”. Meanwhile pornography, homophobia, misogyny and racism all pose real problems on American college campuses, Orenstein contends.

The book has been broadly welcomed, by men as well as women, however. Last month the website The Good Men Project, which sets out to examine “what it means to be a good man in today’s society”, ran a piece which heralded Orenstein’s “eye-opening and compassionate overview of some of the problems boys face in American society”. Schoolteachers as well as parents must start talking to boys about sex, according to its author, New York state teacher Jeff Frank, because of the wide availability of porn: “At the very least, we have to help boys see that sex is not a competitive act.”

Also important, thought Frank, is helping boys to build the emotional strength to be alone sometimes. “This is not about telling boys who they must be, but creating the conditions that allow them to act on their conscience and grow into the men they hope to become.”

Have you been affected by gender-based discrimination or violence?

If you have suffered sexual harassment, abuse, gender-based violence, or rape, and would like to have a confidential discussion about your options, contact Simon at Cape Town Lawyers +27 (0) 86 099 5146 and we’ll call you back. Your issue will be dealt with sensitively and in complete confidence.

This entry was posted in #MeToo, Opinion and tagged in no violence against women & children.

Previous post:
« Nuisance law – when an odour mushrooms out of control
Next post:
Unmerging your money after a divorce »