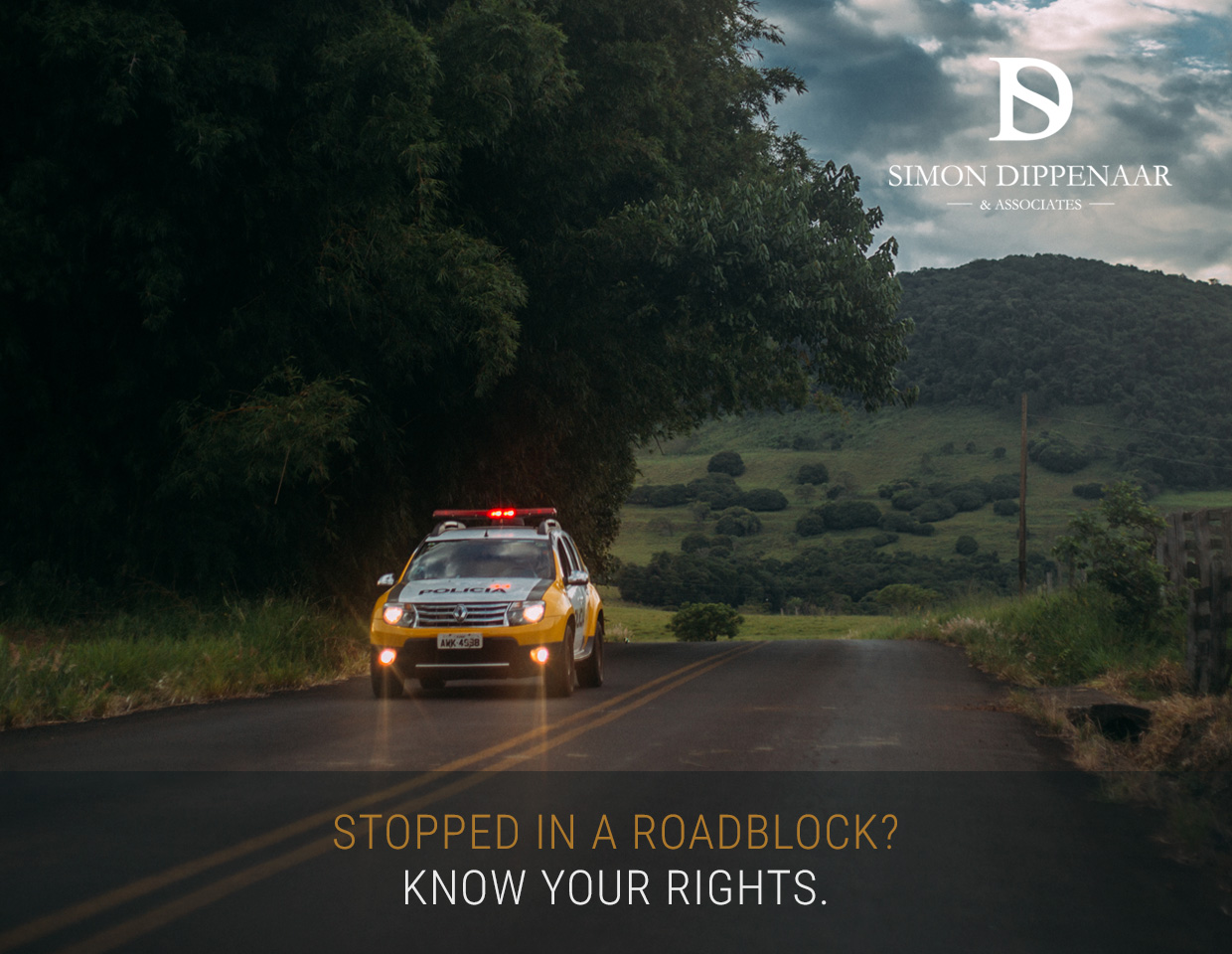 Roadblocks may be set up for a variety of reasons, and many daytime roadblocks are designed to check drivers’ licences, examine the roadworthiness of vehicles, and chase up unpaid fines for motoring offences. But it’s the ones at night that set our hearts racing when we see the blue lights up ahead.

What you need to know about police roadblocks and your rights

Of course the only way to completely mitigate this fear is to avoid drinking and driving, which is the safest and most sensible course of action when in charge of a ton of moving metal. But South Africa does not yet have a zero tolerance policy and it is not illegal to drink and drive, within specified limits.

So you may have restricted your intake to one glass of wine at a function and you are on your way home when you are pulled over in a roadblock. It is understandable to be nervous, despite your responsible consumption. Most police officers are respectful and lawful in their dealings with the public, but we’ve all heard stories of citizens being unfairly accused of wrongdoing, so it is important to know your rights – and the rights of the police – in these situations. You may not be able to protest an unlawful roadblock or detention at the time, but if you are armed with the facts you can gather sufficient evidence to enable you to lodge a complaint at a later date.

Roadblocks must be authorised by the National or Provincial Police Commissioner, as set out in Section 13(8)(a) of the South African Police Service Act 68 of 1995. Furthermore, Section 13(8)(g) of the Act gives police the power of search and seizure at a roadblock. However, if you are stopped, you are entitled to request sight of the written authorisation, which must be provided to you. Police officers on duty at a roadblock must be in full uniform and are obliged to give you their badge number if you ask for it. If all of the conditions for the roadblock are not stipulated in the authorisation and subsequently adhered to by the officers on duty, it can be argued that the roadblock is not legal.

At times a roadblock may be set up without prior authorisation. However, this only happens where there are “reasonable grounds to suspect that…an offence…has been committed and that a person who has been involved…is…travelling in a motor vehicle in a particular area”, or where there is reason to believe that an offence may be about to be committed and it can be averted by detaining the suspect at a roadblock, according to Section 13(8)(d) of the Act. Furthermore, the police are only sanctioned to set up a roadblock without prior authorisation where obtaining such authorisation would cause a delay which might defeat the purpose of the roadblock…in other words it might result in the suspect getting away. In this case, it is a specific vehicle that is the subject of the roadblock. If that is not your vehicle, you are unlikely to be stopped.

How to behave and what you can and can’t do

Even if you suspect that the roadblock is not legitimate, or if you have not been provided with the certificate of authorisation upon your request for it, it is in your interests to behave compliantly. Be courteous at all times and do what is asked of you. Always be willing to show your driver’s licence and ID.

If you are asked to provide a breath sample in a breathalyser device, do so, even if you haven’t been drinking. If you have not had anything to drink you have nothing to fear from a breath test; and resisting or refusing the test is grounds for your arrest. That said, it can be argued (though the constitutionality has not been tested) that, while stopping vehicles in the interests of public safety is quite justifiable, requiring a member of the public to undergo an invasive procedure such as a breath test should only happen where there is reasonable suspicion of an offence (i.e., driving under the influence). So if you have not been drinking and there is no evidence whatsoever that you have (i.e., odour of liquor on your breath, unsteadiness, slurred speech, etc.), and you feel you have been unfairly detained or treated harshly, you may have sufficient grounds for a complaint.

If you are concerned that you may have been stopped in an unauthorised or unlawful roadblock (apart from one unauthorised under Section 13(8)(d)), gather as much evidence as you can. Make a note of the vehicle number (found on the side of the police car) and the officer’s badge number. Also note the date and time. Under stress it is easy to lose track of time, and knowing the time you were pulled over may help when you lay your complaint. You are legally allowed to film the proceedings and your phone may not be removed from you for doing so.

At all times be polite and act lawfully. However frustrated you may be, particularly if you are being held for an unreasonable length of time and there are no grounds for the delay, avoid raising your voice to the officer. Don’t insult or abuse him or her. This could lead to your arrest.

What else can you be arrested for?

You can be arrested at roadblocks for unpaid fines, contrary to what some might tell you, but only if there is a warrant issued for your arrest for those specific fines. In this case, the officers must present you with a valid copy of the warrant. And of course, if your breath test shows that you are over the legal limit for alcohol, you can be arrested and taken to a police station for a blood alcohol test. But you wouldn’t drive when you have had that much to drink, right?

Can you be searched?

Section 13(8)(g) does allow for search of persons and vehicles, but you cannot legally be searched by a member of the opposite sex. So if the roadblock is manned (choice of word intentional) by only male officers, and you are a female, they are not entitled to search you. If there is reasonable suspicion that you are, for example, carrying illegal substances on your person, they must wait until an officer of the same sex arrives at the scene – or they must transport you to the nearest police station – for the search.

Have you been unlawfully detained during roadblocks?

If you have been stopped at a roadblock and you have reason to believe the conduct of the officers was not lawful, or if you have been unreasonably detained at a checkpoint or cordoning off, contact Simon or email simon@sdlaw.co.za.

Cape Town attorneys Simon Dippenaar & Associates are experts in criminal law and can advise you if you have been the victim of injustice. Let us help you today.

Look out for more information…

In the next post we will look in more detail at what would constitute reasonable grounds for the arrest or detention of a driver on the basis of suspicion of driving under the influence of liquor.

This entry was posted in Roadblocks and tagged in cape town, dui, roadblocks.