300 people made homeless in “legal” eviction

Activists and concerned citizens are outraged at the treatment of residents on Klein Akker farm in Kraaifontein. In an act of eviction that is legal but nonetheless inhumane, 300 poor and vulnerable occupants have seen their homes demolished before their very eyes and left by the side of the road, without blankets, clothing or children’s school books. Possessions have either been destroyed or put in storage, where residents can’t access them. 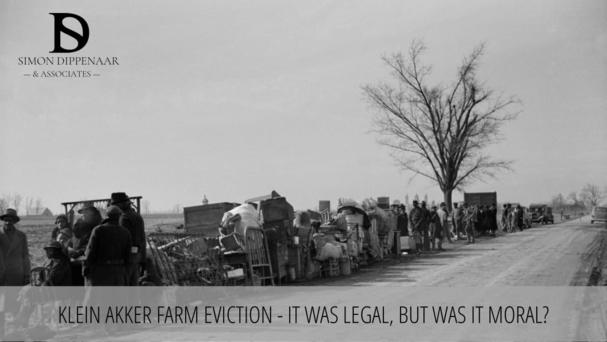 Many residents had lived on the Klein Akker farm for 20 years or more. They were part of a community and they looked after each other. Some had come initially as fruit pickers. When the farm was sold in 2012 and the current owner ceased growing fruit, workers found employment on nearby farms but continued to occupy their dwellings. The owner applied for and was granted an eviction order in October 2017. Residents successfully applied for a stay of the eviction until 1 July 2019.

In accordance with legislation, the City of Cape Town offered alternative accommodation. But the options provided were unacceptable to residents, for reasons of distance and unaffordability of transport to work, and safety. One location was Philippi, which is known for gang violence. Furthermore the land offered at Philippi was sodden and completely unsuitable for housing.

The eviction was completely legal, but was it moral?

On Monday (19 August) law enforcement officials and security guards arrived at Klein Akker and began demolishing shacks with machinery. Clothes and possessions were seized. Children’s school uniforms were taken and put into storage, along with cooking pots and food. Residents were left by the side of the road with nothing to eat and no way to keep warm. The City of Cape Town has defended its position because it twice offered the residents alternative accommodation.

The South African Human Rights Commission (SAHRC) argues that the eviction represents multiple human rights violations, including the right to adequate housing, the right to water and sanitation, the rights of children, the right to a basic education and the right to human dignity. The SAHRC applied to the Western Cape High Court on Wednesday (21 August) to challenge the eviction, and supported the counter application by the Legal Resources Centre for emergency accommodation and constitutional damages for the victims of the Klein Akker eviction.

On Monday (26 August), the Deputy Minister of Agriculture, Land Reform and Rural Development, Mcebisi Skwatsha, committed his department to housing the families who were evicted from the Klein Akker farm in Kraaifontein last week. They are to be temporarily accommodated on a state farm near Stellenbosch. He was shocked by the conditions in which the 93 households were living, following a visit to the site on Monday morning. He said, “As leaders, we cannot just fold our hands while people living on the streets. We have a responsibility to take care of the people, especially at these difficult times like this one.” Source

Last week, following the evictions, the High Court ruled that the City of Cape Town must “make available within 24 hours of this order, temporary emergency shelter in the form of land and emergency housing kits at the emergency housing site known as Kampies, Philippi”. Source

However, the Philippi site had already been rejected by residents as unsuitable for habitation. The intervention from the Deputy Minister is likely to be far more welcome.

At SD Law, we believe property owners have the right to enjoy their property. We also believe that tenants should be treated fairly and justly. We act for both landlords and tenants and have a deep understanding of the relevant legislation. But our insight goes further than that. We are Cape Town attorneys with high emotional intelligence. We seek legal solutions that incorporate moral and ethical conduct and respect human rights. If you have an eviction matter, contact Simon on 086 099 5146 or email simon@sdlaw.co.za to discuss your case in confidence. We’ll never leave you stranded.

This entry was posted in Eviction, Opinion.

« Gender pay gap – alive and kicking
Help! There’s an arrest warrant out for me »