Notice to South Africans: Please visit sacoronavirus.co.za for up to date information on the COVID-19 outbreak.
Blog | Coronavirus | Human Rights in a time of pandemic

Human Rights in a time of pandemic

How might COVID19 impact or even restrict our human rights?

This weekend was Human Rights Day, and we observe and reflect on human rights throughout the month of March. But March 2020 is like no other in recent history. As a nation and as a global community we face a threat that, like human rights, is non-discriminatory. It matters not if you are black, white, coloured, Indian, or any other race. It matters not if you are male or female, young or old, rich or poor, educated to PhD level or failed your Matric certificate. COVID19 is the great leveller; it also has the potential to undermine our human rights in a way unequalled since apartheid. 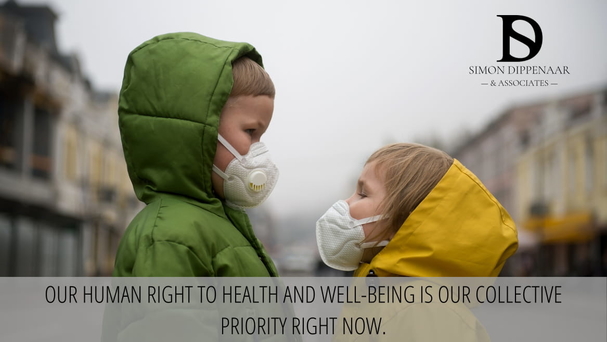 We recently wrote about a High Court case that found in favour of a small community of farms and farm workers whose constitutional and human right to health and well-being was contravened by the activities of a nearby mushroom farmer. In that case the production of compost created noxious fumes that made life intolerable for neighbours. COVID19, by contrast, can’t be smelled, touched, or even seen, except under a microscope. Yet it presents a far greater risk to health and well-being than any odour.

In the coming months, tough decisions will have to be made. In the field of public health, policymakers and health care workers alike often have to disregard an individual’s needs to safeguard the health of many – this is the concept of “the greater good”. When there are not enough resources to go around, they must be used in the way that will help the most people, and those with the highest chance of survival/recovery. This is happening right now in Italy. Tragically, it sometimes means that a person who might have recovered is denied treatment, in favour of someone whose survival likelihood is much greater.

If COVID19 spreads in South Africa the way it has in Europe, our weak public health system will come under intense pressure, and lives that could be saved, in a less resource-constrained society, will be lost. We have only 7000 critical and high-care beds in the whole of the country. We also have a large population living in high-density, unsanitary conditions, where social distancing, self-isolation, and even handwashing are next to impossible. Compounding these challenges, there are an estimated two million people in South Africa living with HIV and not on treatment, and therefore immunocompromised. Diabetics are also at increased risk of severe disease, and our rate of diabetes is high.

Add to that the burden of tuberculosis we suffer. Both current and past TB patients have weakened respiratory systems, rendering them ultra-vulnerable to COVID19. They are unlikely to be among the 80% of patients who experience only mild symptoms and make a full recovery. Therefore, President Cyril Ramaphosa has acted swiftly and sharply, while our case load is still small, to contain the spread of the virus. As we wrote recently, a State of Emergency has not been ruled out.

Are some rights more equal than others?

Our rights function in a not dissimilar way to triage of patients. Sometimes we have to prioritise certain rights over others, in the best interests of society as a whole. Individuals have to be prepared and willing to forego some rights. This does not sit well with South Africans. We are independent, rebellious peoples. We are defiant. In a small way, you can witness this every day in the number of cars that fail to stop at robots as they turn red. In general, three cars will carry on crossing an intersection after the light has turned. An examination of our road traffic accident and death rates shows a high proportion of speeding and DUI offences. We don’t like to be told what to do, or to do what we’re told.

And that defiance is what overthrew the unjust, inhumane apartheid regime. It is what brought diverse immigrants to our shores throughout history, whether fleeing religious persecution, defying social and economic constraints, or just seeking greater personal freedom. South Africans are a paradoxical mix of people who belong to strong communities but value their individual rights and freedoms very highly. Now those attitudes are about to be put to the test.

Protecting the ultimate human right – the right to life

In order to protect our collective right to health and well-being, and ultimately the right to life, the President has restricted our right to public assembly, and to a lesser extent (so far) our right to free movement. In Gauteng all parks and nature reserves have been closed, leading to much grumbling among the dog-walking middle classes. But these people fail to consider the parks in vulnerable communities that are much more densely occupied. Church-goers are up in arms at the prospect of their weekly worship being prohibited. But their members will soon be taking up residence in local hospitals if these restrictions are defied. It feels like living in a nanny state when we can’t go out for a meal in the evening and have a glass of wine. But alcohol abuse leads to disinhibition (completely leaving aside gender-based violence for the moment). The likelihood that social distancing will be maintained in a crowded shebeen is nil.

We as South Africans must pull together and comply, comply, comply. It may go against the grain, but we are going to be asked to step out of our comfort zones many times over in the next few months. Doing what we are told without complaint is just one example. We have to learn new ways of doing things – from working, to educating our children, to entertaining. We have to keep more physical distance between us, while at the same time reaching out to family, friends and neighbours more than ever. In fact, “social distancing” has been replaced in the parlance by “physical distancing, social solidarity”. Thank goodness technology makes this easy. We need to be kinder, gentler, and more aware of each other, from keeping a safe distance in the check-out queue to offering the car guard hand sanitiser with his tip. We need to behave as a community, and not as a collection of individuals.

Never before has the phrase “we are all in this together” been more apt. No one is a victim, and no one is to blame. We are all going to suffer economically, and the poor will suffer disproportionately. Those of us who suffer less must help where we can.

No one is an exception

MOST IMPORTANTLY, we must not think the restrictions do not apply to us. If we do not all heed the President’s measures voluntarily, the government will have no choice but to declare a State of Emergency. The details are discussed here, but, in short, in a State of Emergency your human rights are trumped by the public emergency. You could be told to stay indoors except to purchase food and medicine and face prosecution if you do not abide by the rule. In France, recreational cycling is prohibited. Cycle trips of only two kilometres are permitted to go to the shops. Cyclists are being traced via Strava and fined large sums for failing to adhere to the restrictions. Experts agree that it is important to keep exercising, both for immune system support and mental health; but where the public health is so threatened, as it is in France right now, the individual’s right to well-being comes second.

Our resilience as a society is being tested in unprecedented ways. Our rights are being challenged. We may not like that, but at SD Law we firmly believe that as South Africans we have the capacity to get through this, to look after each other, and to come out stronger and more unified than ever before.

As expected, the President last night announced a national lockdown for three weeks. Fortunately, he has given us a few days to prepare – so get your toilet rolls in! Seriously, we urge all South Africans to abide by these unprecedented restrictions. Our epidemic curve is still young, but the number of infections is increasing exponentially day by day. Countries that have taken early, decisive action, like Taiwan and South Korea, have not been as badly hit as those that have delayed and dithered, like the UK and US. The UK last night also announced a total lockdown, as citizens were not complying sufficiently with recommended movement restrictions. Our health system – including the private sector – will not cope with infection on the scale of Italy, France, Spain or Germany. Let’s all do our part to #flattenthecurve.