Women are still not paid equally for equal work 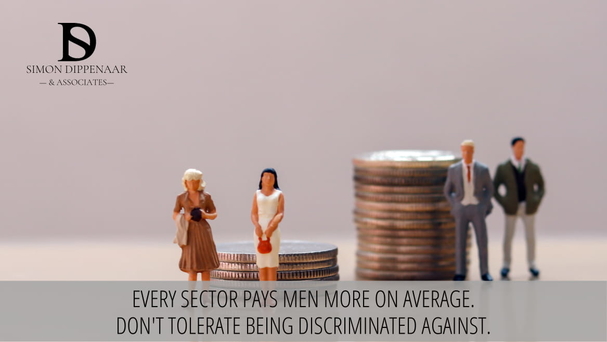 Last year during Women’s Month the world was focused on the Harvey Weinstein case and the #metoo campaign, which emerged in the wake of a parade of women coming forward with harrowing tales of sexual abuse and sexual harassment at the hands of Weinstein and many other celebrities. Over the course of the past year we have learned that male sexual predation is not only commonplace but normalised and even lauded in many cultures. Donald Trump dismissed his own brags about groping women as “locker room talk”, in other words just something guys do. Following these revelations a conversation developed about “toxic masculinity”, defined as “a set of behaviours and beliefs that include…suppressing emotions or masking distress; maintaining an appearance of hardness;  [and] violence as an indicator of power.” Sociologists also talk about “enhanced femininity” – Erving Goffman said that women are socialised to be “precious, ornamental and fragile,” and to display “frailty, fear and incompetence.” While women rarely pretend to be frail and incompetent these days, there is still social construction around what is considered feminine. When enhanced femininity meets toxic masculinity, the outcome is predictably unfortunate and sometimes tragic.

These issues are important – vital, even. South Africa has a culture that objectifies and derides women and results in the highest incidence of rape in the world. We must confront social norms and change them when they do not promote a fair, equitable and just society. But equally important, and somewhat buried in the emotive narrative of #metoo, is the practical aspect of gender equality: equal access to opportunities and equal pay for equal work.

A report just released by management consultants PwC revealed that women in South Africa are paid less than men, not just in certain industries or occupations, but across the board. There is no industry where women are paid more than men. For example, in the major industries of technology and financial services, men are paid 22.9% and 21.8% more respectively. In health care men are paid c. 28.1% more than women, and 25.1% more in media and general retailers.

The World Economic Forum introduced the Global Gender Gap Index in 2006. It is a framework for measuring gender-based disparities in four areas – Economic Participation and Opportunity, Educational Attainment, Health and Survival, and Political Empowerment. It is published annually and tracks progress made against these important indicators. The 2018 report reveals that the Global Gender Gap score is currently 68%. This means that, on average, there is still a 32% gap to close. The most equal country is Iceland, followed by the other Nordic countries. But somewhat surprisingly, Rwanda and Namibia are in the top 10, which makes South Africa’s position all the more indefensible.

South Africa has the nineteenth smallest gender gap out of 149 countries. However, this overall ranking belies a much poorer standing on two of the four dimensions. Our aggregated score is buoyed up by strong results in Political Empowerment and Health and Survival. When it comes to Educational Attainment we rank 72 out of 149 countries, and even worse in Economic Participation – 91 out of 149, with a score of 64.5% gender equality. Clearly we have a long way to go to attain the equal rights envisaged by the authors of our Constitution.

It probably comes as no surprise to find that the private sector is less equal than the public sector. After all, it would be harder for government to justify defying its own equal opportunity legislation. However, it needs to do more to see that laws are upheld. Labour law expert Bridgette Mokoetle says that women are often denied opportunities with excuses such as lack of work experience. Laws and policies that exist to ensure equal pay for equal work are not adequately enforced.

Differences top and bottom of the spectrum

An interesting feature of the pay gap is that it is worse in higher-earning jobs. This is because previous disparities in low-paid jobs, where women were often discriminated against and paid much less than men in jobs of equal value (e.g. domestic worker/gardener), have been remedied by the introduction of a minimum wage. However, at the other end of the spectrum, women are under-represented in senior positions, which is reflected in the managerial pay gap statistics, according to research by UCT’s Jacqueline Mosomi. Women still occupy lower-paid jobs, i.e. administrative and less technical occupations than those in which men are more prevalent.

Social researchers Kahn and Motsoeneng suggest that women’s under-representation in senior management is related to a shortage of women with suitable qualifications as a result of racial segregation in the past and discrimination against women in general. Black women in particular have been victims of both racism and patriarchy, so are particularly under-represented at senior level.

In the middle of the earnings distribution spectrum, the gender wage gap has moved very little since pre-democracy. Men still earn 23% to 35% more than women. The majority of occupations in this middle ground are male-dominated, such as service, craft or operational work.

What’s the solution to the gender pay gap?

The onus to close our gender pay gap – and to rectify other gender inequalities in our country – lies with our legislators. Policies and laws exist to ensure equality, but their enforcement is piecemeal and indifferent. B-BBEE legislation has been tightened and employment equity in terms of race is improving, as a result of a concerted commitment to transformation. Black women are of course included in overall B-BBEE indicators, but the focus is on race, not gender. B-BBEE compliance does not in itself address the gender pay gap.

Business owners also have a responsibility to review pay scales and distribution of women in key roles, including those all-important median occupations mentioned above, and to investigate their recruitment practices and ensure equal opportunities exist in practice, not just on paper.

Parents and educators need to encourage girls and young women to consider careers in STEM and tech-related fields, and to stop categorising occupations as “male” or “female”.

Kahn and Motsoegeng recommend that the priorities for closing the gender pay gap are: fighting discrimination, supporting training and development, and providing women with better access to career development.

And finally, we all, whatever role we play in the workforce and in society, need to examine our own mindsets and ensure we live the values of our Constitution. We need to be non-racial, gender-neutral and inclusive in our values and our conduct. This is the only way we will transform our society and close all the gender gaps, not just the pay gap.

If you are the victim of gender pay discrimination

Unfortunately, much pay inequity is not illegal. However, genuine discrimination, which our legislation prohibits, does still exist. If you think you have been the victim of gender, race or any type of pay discrimination at work, contact Cape Town attorneys. We will investigate your case and support you at the CCMA or help you bring a private matter before your employer.

Contact Simon on 086 099 5146 or email simon@sdlaw.co.za to discuss your case in confidence. SD Law and Associates are experienced Cape Town lawyers who are committed to Constitutional justice and human rights for all South Africans.

Previous post:
« Klein Akker Evictions – update
Next post:
Will it be bail or gaol for convicted killer Jason Rodhe? »