Blog > Bail > Will it be bail or gaol for convicted killer Jason Rodhe?

Why bail is not always granted

In November 2018, Jason Rohde was convicted of killing his wife Susan and defeating or obstructing the course of justice by covering up her murder to make it look like a suicide. He is currently serving a 20-year sentence. 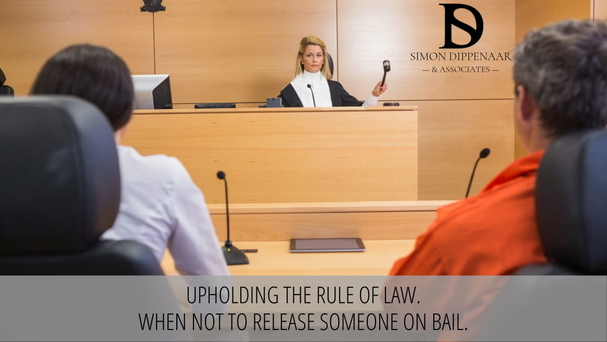 Rohde has now asked the courts to grant bail so he can manage his business interests pending the outcome of his application to have his conviction and sentence overturned in the Supreme Court of Appeal (SCA). But the Western Cape High Court has denied bail. Granting bail would “offend the rule of law and make a mockery of the criminal justice system,” Judge Gayaat Salie-Hlophe said at the hearing. The court did not believe that the facts presented by Rohde’s legal counsel were “sufficiently compelling to justify his release.”

Being presumed innocent is not enough

Section 321 of The Criminal Procedure Act and legal precedent guide the decision on whether or not to grant bail. An accused may be released on bail while awaiting trial to carry on with his life and earn an income if there is a possibility that he may be acquitted or given a suspended sentence or probation. In this scenario the accused is still presumed innocent.

In the case of Essop v the State, for example, the court ruled that the presumption of innocence no longer applies if someone who has already been convicted and sentenced for a crime later applies for bail pending the finalisation of his appeal against his sentence.

In Rohde’s case, he too had already been convicted of murder and no longer enjoys the presumption of innocence. So, although he has been granted leave to appeal in the SCA, this does not in any way invalidate the fact that he has been found guilty and does not entitle the applicant bail pending the hearing of the appeal. (See R v Mthembu 1961 (3) SA 468.)

Being presumed innocent is only one factor considered in determining whether to grant or deny bail.  In the Essop matter, bail was granted pending the appeal, subject to strict conditions and under very different circumstances: The accused had pleaded guilty, the court felt that the sentencing magistrate had handed down a sentence far too severe, the appeal court was likely to amend the sentence, and Essop was not regarded as a flight risk.

Does it serve the interests of justice?

The Court must also consider whether together all the facts constitute exceptional circumstances that would justify Rohde being released on bail (R v Milne & Erleigh (4) 1950 (4) SA 601 (W) at page 603 and S v Bruintjies 2003 (2) SACR 575 (SCA) para 6). In S v Scott-Crossley 2007 (2) SACR 470 (SCA) the court held that the likelihood of success alone is not sufficient. Additionally, Section 60(4) and (5) state that the interests of justice do not permit an accused being released on bail during trial and preceding conviction. On this basis, the court ruled that releasing Rohde would not serve the interests of justice and, in any event, he had already been convicted.

Under what circumstances is bail denied?

Numerous factors come into play in the court’s decision to deny bail:

Furthermore, South Africa has the worst levels of gender-based violence (GBV) in the world and the highest incidence of rape per capita. The latest crime statistics reveal that seven women and three children are killed in this country every single day.

The recent spate of gender-based violence in this country is alarming and the judiciary must be seen to be upholding the rights of women. This is further reason to deny bail for Rohde.

A decision to release Rohde on bail would undermine the rule of law and make a mockery of the criminal justice system. The reasons to keep him behind bars are far more compelling than any justification to grant bail to someone convicted of such a dreadful crime.

We will ensure that your constitutional right to a fair trial is upheld and we always consider alternative dispute resolution/mediation instead of gaol time. Contact Simon on 086 099 5146 or email simon@sdlaw.co.za for any advice about criminal law.

Previous post:
« Gender pay gap – alive and kicking
Next post:
Utility bills – who’s responsible and how to manage them »