Blog > Divorce > After Divorce – Can you still be friends with your ex? 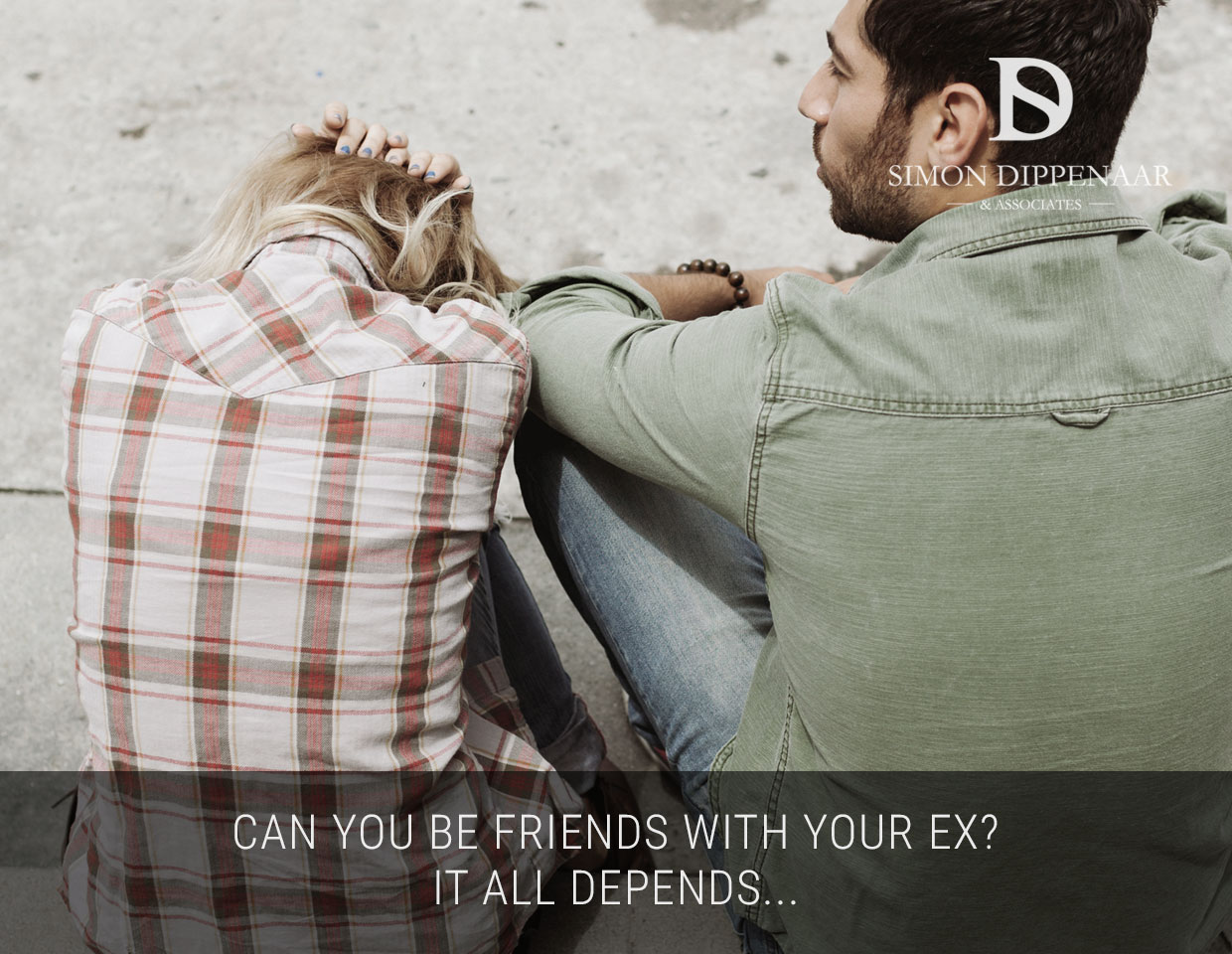 After divorce, is it possible to be friends? As family law practitioners, we see every kind of divorce imaginable, from amicable to acrimonious and everything in between.


Getting to friends after divorce.

Unsurprisingly, the nature of the divorce often corresponds to the tenor of the relationship: couples who had a harmonious marriage and simply fell out of love tend to navigate a relatively civil break-up. At the other end of the scale, partners whose marriages were characterised by blazing rows and/or chilly silences are more likely to continue the pattern of conflict into the divorce proceedings. When there has been violence, infidelity or deceit a friendly end to the marriage is unlikely.

While divorce, however civil, is a painful experience and not the best time to renegotiate the relationship, for many couples there does come a time when their friendship is stronger than ever – they just don’t want to be married to each other anymore.

We were curious about why some couples become friends…sometimes very good friends…after divorce, while others never move past bitterness and recriminations. We spoke to someone who divorced when her children were small, having been married for eight years, and whose own parents divorced after 32 years of marriage. Mother and daughter had very different post-divorce relationships with their ex-husbands, and we wanted to know why. This is their story, told to us by the daughter.

You could say divorce runs in our family. My parents split up, after 32 years of marriage, when their first grandchild (my son) was three months old. There was another woman involved, but my father was quick to deny this was the reason for the divorce – saying it was a symptom rather than a cause. The onset of grandparenthood may have triggered a mid-life crisis, but the affair had been going on long before the baby entered the scene. My mother, typical of women of her generation, had given up work to raise a family and so was financially dependent on my father.

My own divorce came later, after my second child. My son and daughter were five and three when my marriage reached the state of irretrievable breakdown, though we had separated briefly before. In hindsight, we should have stayed apart then, but we felt we owed it to the children to try to put things right. The divorce was not finalised until three years after our separation. We lived in Scotland, where the law allows for “no-fault” divorce if both parties agree to the divorce and live apart for two years. We had nothing in the way of assets, so the financial division of spoils was irrelevant, and my husband did not contest my claim for custody. Those three years were not easy – far from it. But by the time we were no longer legally husband and wife, we had passed the stage of thinking of ourselves in those terms. We were simply the parents of our children. And without ever voicing it, we knew we had to treat each other decently to avoid causing those children harm. Things were ugly when we first split and I wanted to spare them further trauma.

My mother, by contrast…

In my mother’s case, things couldn’t have been more different. Custody of children was irrelevant as my sister and I were adults. The financial aspect of the divorce, however, was about as messy as it gets. Although my father had been unfaithful and had initiated the divorce proceedings, for reasons I will never understand he treated my mother as if she were to blame, possibly driven by his own guilt. Negotiations were protracted, vicious and spiteful. My mother was, understandably, fighting for her future livelihood; as a woman in her mid-50s in the 1980s, who hadn’t worked in 30 years, she was unlikely to enter the job market and earn enough to support herself, let alone maintain her lifestyle, which was not extravagant. My father was determined to give her as little as legally permissible, while she was resolute in her claim to compensation for having raised his family and advanced his career in her role as wife and social partner.

The divorce took a very long time to settle, with many cruel and hurtful exchanges between lawyers and the estranged couple, so that by the time the decree came through, my mother was drained of all respect and compassion for my father and unable to remember why she had once loved him. Sadly, despite the passage of 30 years and the death of my father three years ago, she is still tormented by bitterness and hurt.

My children are grown and my ex-husband has remarried twice and is now alone again. He has been in and out of our children’s lives and in recent years has drifted away, and we no longer have any contact with him. My ex and I are not the best friends that some divorced couples are, but, importantly, we managed to maintain a healthy relationship while the children were growing up. Our contact was limited to the children’s activities and didn’t extend to social interaction beyond that; but we often reminisced about fun things we had done together as a family and occasionally teased each other about particular traits or habits. Contact was genial, although I wouldn’t have chosen to spend time with him under any other circumstances.

I know of some couples who remain genuine friends, but my situation is probably the most typical of divorced couples. One friend, who regularly travels overseas with her eight-year-old daughter to visit family, can count on her ex to take them to the airport, and hosts play-dates with the child of the ex and his new partner. The journey to reach that cordial state was not a smooth one, but their daughter is infinitely better off for it, as are both parents. Living in a constant state of anger and resentment takes its toll on one’s mental health; it is not only the children who suffer.

How to “get to friends” after divorce

Having experienced divorce personally and vicariously through my mother, and having watched a number of friends go through the process, I can offer the following tips, with the caveat that I am not a professional psychologist or counsellor. After divorce, I strongly recommend seeking professional therapeutic support if you are finding it difficult to cope during or after divorce.

We’re here to help even after divorce

If your relationship has reached the end of the line and you would like to discuss your options, we’re here to help. Contact Cape Town family lawyer 087 550 2740 or 076 116 0623 or email simon@sdlaw.co.za. SD Law & Associates are family lawyers with expertsise in divorce and care and contact of children. You are assured of absolute confidentiality.

This entry was posted in Divorce and tagged in after divorce, divorce, family law, south africa.