Notice to South Africans: Please visit sacoronavirus.co.za for up to date information on the COVID-19 outbreak.
Blog | Divorce | Married out of community of property with accrual?

Married out of community of property with accrual?

A fair regime, but how is the accrual calculated? 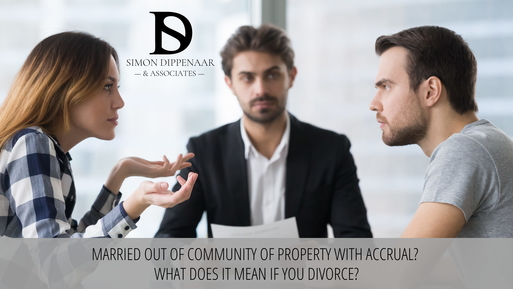 No one marries intending to divorce. We’re sure that Bill and Melinda Gates would never have imagined, 27 years ago when they tied the knot, that they’d one day be announcing their divorce to the world. If they had, they might have drawn up an antenuptial contract, given that Bill had already accumulated considerable wealth before he married. But according to Washington state law, their marriage was “community property”. This resembles our “out of community of property with accrual”, in that, in Washington, property and debt accumulated during a marriage is classed as “community property” belonging to both spouses, but property acquired prior to the marriage is considered the separate property of the spouse who acquired it. In South Africa, “out of community  of property with accrual” is considered the fairest and most equitable of all the matrimonial regimes available, but what does it actually mean? How is the accrual calculated if the marriage ends in divorce?

The role of the ANC

Let’s briefly review the matrimonial property regimes on offer to couples. First, the default option is “in community of property”. This was historically the most common regime, and it gave some protection to women, who traditionally had few assets or income of their own. It ensured a divorced woman was not left destitute. The other two possibilities are “out of community of property” – “with accrual” or “without accrual”. In order to effect either of these regimes, there must be an antenuptial contract (ANC) in place.

The role of the ANC is to define the financial consequences of the marriage, should it end in divorce. It describes the terms of control and ownership of property, title of assets and how they will be divided if the marriage ends. The ANC is a way of protecting individual rights. The “out of community of property with accrual” regime strikes a balance between safeguarding the individual possessions of each spouse prior to the marriage and acknowledging the mutual support and collaboration that occurs in a marriage to add value to each spouse’s net worth.

What, in legal terms and in the context of the “out of community of property” regime, does “accrual” mean? The dictionary definition – “the accumulation or increase of something over time, especially payments or benefits” is pretty close to the legal meaning. “Accrual” in our context refers to the net increase in the value of each spouse’s estate after the marriage. The assets and liabilities they claimed before they married remain theirs. The resources and assets they build up – or accrue – while they are married are classed as joint property, to be divided equally should they split.

It’s interesting – and important – to note that, in the definition of “out of community of property”, each spouse’s estate is considered separate while they are married. The estates are only aggregated on divorce. At this point, the property the pair acquired during the marriage is assessed for the purposes of calculating the accrual.

The accrual system may be fair, but it is undoubtedly complex. Unlike a marriage “in community of property”, where everything is split 50/50 on divorce, in the accrual system each spouse must tally their current assets. This includes fixed property, vehicles, cash, investments, shares, furniture, insurance policies and retirement funds – all the assets accumulated during the marriage. For a couple with considerable assets, or an older couple, this could be an intricate calculation. See Silver Splitters for a discussion of the issues faced by couples divorcing later in life. The next step is to deduct any assets that were specifically excluded in the antenuptial contract, and any inheritances, legacies or donations.

It’s worth noting that any debts and liabilities accrued during the marriage are then deducted, so it is a net calculation. In other words, debt incurred prior to the marriage remains the sole responsibility of that spouse and is not part of the accrual calculation, but debt incurred by either spouse during the marriage forms part of the accrual. Then, each spouse deducts the initial value of their estates – as defined in the antenuptial contract – from the subtotal. This is then adjusted by the consumer price index (CPI), to reflect the change in the value of money over time. Finally, they each arrive at a value for their respective estates. The value of the smaller estate is deducted from the value of the larger estate. Each spouse has a 50% claim to the difference. Confused? It’s almost enough to make you want to marry in community of property!

In addition to assets specified in the ANC, there are certain automatic exclusions from the accrual calculation:

For older couples in particular, retirement funds are a crucial part of the mix. Where either or both of the spouses contribute to a pension or provident fund, the value is included in the accrual calculation, unless the ANC specifically excludes it. In the event of divorce, the “pension interest” is the benefit the member would have been entitled to if their membership of the scheme had ended at the date of divorce. In the case of a retirement annuity, “pension interest” is the amount of the member’s contribution right up to the date of divorce, with interest added at the prescribed rate.

The accrual system, as we’ve noted, is incredibly complex. We have highlighted the key points in this article, but there are numerous details space doesn’t allow us to cover. If you want more information on the accrual system, the different matrimonial property regimes, or advice on an antenuptial contract, call family lawyer Simon Dippenaar on 086 099 5146 or email sdippenaar@sdlaw.co.za.

This entry was posted in Divorce and tagged in accrual, divorce attorneys, Family lawyers.