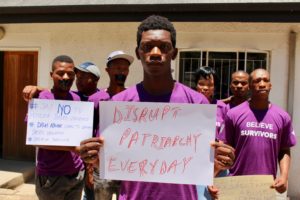 Violence against women in the workplace – time for it to stop!

16 Days of Activism for No Violence Against Women and Children runs from 25 November till 10 December each year. In fact, the 25th of November is specifically observed as the International Day for the Elimination of Violence against Women, an initiative started by activists at the inaugural Women’s Global Leadership Institute in 1991, which continues to be coordinated each year by the Center for Women’s Global Leadership (CWGL). The 16 Days of Activism is an international campaign, also coordinated by the CWGL, which is used by activists around the world as a platform to call for the elimination of all forms of gender-based violence.

South Africa is one of 187 countries to participate in the 16 Days of Activism Campaign since 1991, with a reach of 300 million. The objectives of the campaign, taken from the dedicated website, are to:

2019 theme for 16 Days of Activism – ending violence at work

Each year’s campaign has a theme, and this year it is ending violence against women in the world of work. This is particularly salient in the South African context, where there is a push to encourage women into traditionally male-dominated occupations and professions. Take mining, for instance – a mainstay of our economy and our labour market. Until 1996, women were not permitted to work underground. The South African Mining Charter of 2004 introduced a requirement that a mine’s staff complement must include at least 10% female miners. But a mine is not an easy environment for women to enter. Early women mineworkers faced challenges such as equipment and protective clothing sized for men, forcing women to use ill-fitting gear that made their jobs harder and even unsafe. Fortunately, this is beginning to change, through pressure from unions and female employees and efforts by the Chamber of Mines and equipment manufacturers. However, there are still inadequate ablution facilities, and women often have to share changing rooms with men.

The outcome is sadly predictable: women are subjected to sexual assault and rape in the workplace. In one tragic and high-profile incident, a woman miner was found dead, a used condom next to her body, at Anglo Platinum’s Khomanani mine in 2012. In 2015, at another Anglo Platinum mine, Thembelani in Rustenberg, a woman was attacked and raped by a suspected illegal miner in the women’s changing rooms while showering.

No industry is immune

Violence against women at work is not confined to blue collar occupations. Sexual violence – and its close cousin, sexual harassment – are of course illegal in this country. Obviously assault, sexual or otherwise, is a criminal offence, but sexual harassment is also a form of unfair discrimination on the basis of sex, gender and/or sexual orientation. It has been described by the Labour Appeal Court as “the most heinous misconduct that plagues a workplace”. Why, then, is it so rife?

According to unwomen.org, “Rape is rooted in a complex set of patriarchal beliefs, power, and control that continue to create a social environment in which sexual violence is pervasive and normalised.” South Africa still has a deeply entrenched patriarchal society, borne out by our rape statistics, despite a progressive constitution and ground-breaking advances in other aspects of our society.

Employers are obliged, under the Occupational Health and Safety Act, to create a workplace that safeguards the health and safety of employees. It would be impossible to foresee and pre-empt every possibility of harm, but employers must take all tenable steps possible to protect employees from injury or distress that can reasonably be prevented.

Furthermore, the 2005 Amended Code of Good Practice: Sexual Harassment Cases (the Code) requires employers to ensure that the dignity of employees is respected in the working environment. Part of this stipulation is the inclusion of appropriate sexual harassment policies defining the process of handling sexual harassment sensitively and efficiently, including the provision of support to victims. However, while employers are permitted to report sexual violence to the police, there is no legal requirement for them to do so. The responsibility to press charges lies with the victim, and there are many obstacles that prevent this happening. This needs to change.

Employers must lead the way, but they cannot change mindsets by imposition. Workers of both sexes need to buy into the problem in order to be part of the solution. This is not just a “women’s issue”.

Employers need to provide adequate security on the premises to ensure the safety of women, especially after hours; and there needs to be a confidential means of communication that allows victims of sexual harassment or violence to report it, without fear of repercussions. These are the basics that must be in place so long as sexual violence is still a threat in our society.

But security alone is not enough

To remove that threat altogether, attitudes and norms must change. To encourage this, employers can offer sensitivity and awareness training. Many men pay lip service to gender equality and are genuinely appalled by gender-based violence, but at the same time they participate in bar conversations ranking the females in their office in order of attractiveness. They need to realise and understand that this is not acceptable; it’s on a continuum of debasement of women that ultimately ends in violence and rape. Men need to speak out when they witness sexual harassment, abuse or violence. This includes innuendo, “accidental” touching, and lewd looks. It doesn’t matter if the perpetrator is their best mate; silence is collusion. Good men must speak up in the presence of unacceptable behaviour by other men. Claiming to be without blame but turning a blind eye to the transgressions of others makes one as guilty as the offender himself.

SD Law stands firmly behind the campaign to end violence in the workplace and supports 16 Days of Activism for No Violence Against Women and Children. We will not stand by when we see men mistreating women or in any way perpetuating the social norms that feed our horrendous rape statistics.

We can act for you if you have been a victim of sexual violence, in the workplace or anywhere else, and would like to bring charges against your assailant. We understand that the process of coming forward is frightening and distressing. We will provide a safe, trusting environment where you will always be believed. SD Law is a firm of Cape Town lawyers, also practising in Johannesburg and Durban, with expertise in family law and criminal law. Contact Simon on 086 099 5146 or email simon@sdlaw.co.za for a confidential discussion.

This entry was posted in #MeToo, 16 Days of Activism, Sexual Harassment and tagged in 16 days of activism, no violence against women & children.